Colorado has an estimated 23,000 abandoned mine lands, according to the Colorado Geological Survey.  At least 230 of those mines are leaking heavy metals into the headwaters of our state rivers.  State officials have estimated that approximately 1,645 miles of waterways have been polluted by mine runoff, including the Arkansas, Animas, Eagle, Big Thompson, Gunnison, South Platte and Uncompahgre rivers.  Contaminants include lead, copper, cadmium, arsenic, manganese, mercury, zinc and other contaminants.
If a mining company declares bankruptcy, as the owners of the Summitville gold heap leach mine did, taxpayers have to pay for the cleanup.  Lack of government funding means there are few cleanup projects. 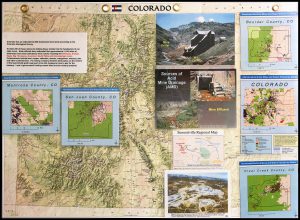