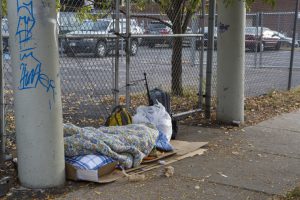 Members of the Metro Denver Community Rights group have been supporting efforts by Denver Homeless Out Loud to pass a statewide Right to Rest Act in the Colorado Legislature.  This Act would allow homeless people to exist and survive in public spaces, to sleep in a legally parked car, to share food or eat in public spaces, and have a reasonable expectation of privacy for their personal property in public spaces. 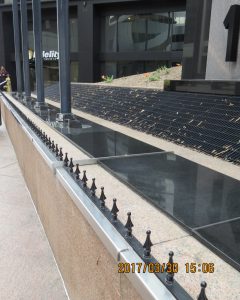 The Right to Rest Act has been introduced three years in a row and will be run again in 2018.  In 2017, the vote came after an 11 hour hearing including testimony from over 60 people supporting the Right to Rest and only 5 people who testified
in opposition. Person after person supporting the right to rest testified to being threatened, having their belongings stolen and being forced by police to “move along.” Lawyers, business
owners, service providers and faith leaders each spoke to the unconstitutional, dehumanizing and moral impacts of criminalizing houseless people’s existence.

Beloved Community Village made its move…all the way to 38th and Blake…by way of forklift! 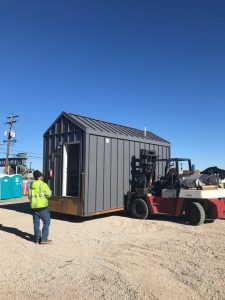 Tiny home being moved into place

The village had been operating on a six month, temporary use permit that expired in mid-January. All eleven tiny homes, and residents, were moved to a new parcel of land just across the alley. After considering three different locations offered by landowners for the village use, the villagers unanimously agreed to move across the alley and stay in RiNo.  While this move is just about 200 feet it cost about $25,000 and took two weeks of non-stop work to move the homes. 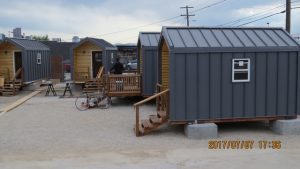 Beloved Community Village, the first tiny homes community in Denver, was built in about 2.5 months on land temporarily offered by the Urban Land Conservancy.  Mennonite Disaster Services oversaw the project.  Over 400 volunteers [including Denver Homeless Out Loud, the Beloved Community Mennonite Church, a few Metro Denver Community Rights members, many local businesses and citizens],  donated labor, funding and materials.  Whiting – Turner, a construction company, helped to build the homes and shower building and set up electrical service.  At the Village, there are 11 homes, a shower building, two sanilets, trash service, a circular community building, a tiny free library and gardening spots.  Bayaud Enterprises brings in a laundry truck on Fridays and sends a Resource Navigator to the village to assist residents in getting help they need.  The Village is self-governing.  Oversight and assistance are provided by the Beloved Community Advisory Council, which includes some Village residents, representatives of surrounding neighborhoods, and some of the organizations involved in creating the tiny hones community.

Villagers now have a safe spot to live, a shared community to help each other, a mailing address to use for job hunting and registering to vote, a secure place to keep their personal possessions, and a home where they belong.