Fracking, or hydraulic fracturing, is the process of injecting millions of gallons of water, tens of thousands of gallons or pounds of chemicals and tons of silica sand to fracture rock formations and create pathways for natural gas and/or oil to flow into and up the well bore. The produced petroleum products are then trucked, piped or shipped for refining and distribution while most of the waste fluids and solids are trucked to injection wells and landfills for disposal.

There are documented cases of poisoned streams, underground aquifers and water wells from spills, illegal dumping and toxic fluid migration. The original fracking fluid, flowback fluid, contains carcinogenic and endocrine-disrupting chemicals while the continually produced water contains endocrine-disrupting chemicals such as benzene, toluene, ethylbenzene and xylene (BTEX) as well as naturally occurring radioactive elements present in the shale formation. The fracturing of the shale layers and more commonly the injection of the waste fluids have been associated with induced seismicity, i.e. earthquakes. As of 2015, there are over 100 peer-reviewed scientific papers that show problems in public health, water pollution or air pollution due to shale gas development. See the following paper: http://www.psehealthyenergy.org/site/view/1233

Attempts to prevent fracking by legislation in Colorado

There have three recent attempts to stop fracking by local legislation at the city level: Fort Collins and Longmont in 2012 and Lafayette in 2013. In each case, citizens passed by a majority vote to stop oil and gas extraction, either permanently (Lafayette) or temporarily (a 5 year moratorium in the case of Fort Collins and Longmont). The case of Lafayette was different, because their ban was based on the Lafayette Community Bill of Rights, which also gave rights to Nature and officially declared that corporations are not people, and not entitled to constitutional rights.

In 2014, Lafayette’s ban was declared preempted by state law by a federal district judge. The Lafayette City Council could have appealed the case, but chose not to, based on their city attorney’s (David Williamson) advice that it would be too costly to litigate. There was an attempt by the non-profit East Boulder County United to appeal the decision, but was mysteriously later withdrawn. This is discussed in more detail in this blog post by Rick Casey, Community Rights: Still waiting for its Day in Court.

The Longmont and Fort Collins cases took longer to resolve because their city council’s did appeal them. But in 2016, the Colorado Supreme Court decided on both these cases at once, and declared that state law, based on “sound principles”, namely that such local laws “operationally conflicts” with state law, and are therefore “invalid and unenforceable”. (Colorado Supreme Court rules state law trumps local bans on fracking, Denver Post, May 2, 2016) No other justification was given.

On the face of it, these court decisions have been made only on the basis of court precedent and past conditions of climate and energy awareness; but times change, and the laws should change with them. There has not been any real argument given for why such court precent should not be overturned. In the Lafayette case, where the ban was based on very carefully defined community rights, neither the plaintiff, the Colorado Oil and Gas Association (COGA) nor the deciding judge, even so much as mentioned the words “community rights” anywhere in their writing; in other words, they avoided the issue. Lafayette’s citizens, based on home rule, which is supposed to guarantee that local laws have the force of state law unless they are in direct violation with state law, passed a law, which was then ignored by a federal judge. This is not right and deserves a retrial.

Lots of work against fracking is taking place in East Boulder County.

Commercial Landfills in Colorado have been advised that disposal of Oil and Gas Exploration and Production (E&P) waste is not exempt from Colorado Solid Waste Regulations (1), for example, 6 CCR 1007-2.  Disposal of fracking waste is a nation-wide problem.  READ MORE here….

A Greeley ban on oil and gas extraction enacted as a local ordinance in 1985, both by ballot initiative in a home rule city, and by city council action, was overturned by two 1992 Colorado Supreme Court cases, Voss v. Lundvall Bros. Inc and Bowen/Edwards Assoc. Inc. v. Board of County Commissioners of La Plata County, holding that the Colorado Oil and Gas Conservation Act (O&GCA) preempts any outright ban as well as any local regulation that creates an “operational conflict” with O&GCA.… Read the rest 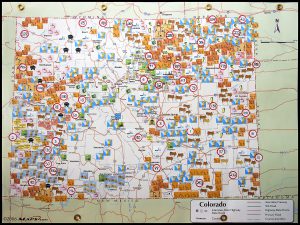 This Colorado map shows many of the toxic industrial sites in our state.  The Metro Denver group spent many tens of hours researching the types and locations of these facilities.  After a while, due to the large number of facilities that have to fit on the map, the best we could do was to put the facility icons in the correct county.
… Read the rest

AN ORDINANCE OF THE CITY COUNCIL OF THE CITY OF LAFAYETTE, COLORADO, ENACTING THE CLIMATE BILL OF RIGHTS AND PROTECTIONS

WHEREAS, the people of the City of Lafayette find that global environmental destruction, which includes degradation to the climate, ecosystems, flora, fauna, land and water, constitutes an emergency that threatens our very survival; and;

WHEREAS, the people of the City of Lafayette believe that the systematic poisoning of our water, air and soil are activities that directly affect the health and safety of all residents and infringe upon our right to life, liberty and property; and

WHEREAS, the people of the City of Lafayette find that the environmental degradation and introduction of toxic chemical pollutants resulting from the extraction of coal, oil and gas, and disposal of drilling waste within the City would significantly contribute to environmental destruction, and life-endangering health risks.… Read the rest

Section 2.3. – COMMUNITY BILL of RIGHTS and OBLIGATIONS- PROHIBITING THE EXTRACTION OF OIL AND GAS TO SECURE THOSE RIGHTS