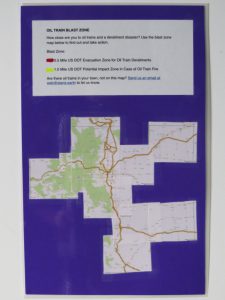 Crude oil is a hazardous mixture.  Some crude oils, especially fracked oil from the Bakken formation in North Dakota, Montana and two Canadian provinces, contains volatile components.  Due to the fracking boom, there has been an explosive growth in crude oil transport by rail, which has caused  human deaths, environmental contamination and huge explosive fires that fire departments simply cannot fight — they just have to let them burn out.

Inspections have shown that there are defects in the tracks around the country that could cause derailments.  Rail cars transporting crude oil have had few significant improvements made to them since the development of the older 111 and 111A tanker cars developed back in the mid-1970’s. Tanker cars designed for transport of liquids, but not explosive materials, are being used.  Rail lines go right through downtown areas of large cities like Denver and Seattle, and also pass through many small rural communities and along special natural areas like the Columbia River Gorge, Glacier National Park and the Hudson River.  We have posted a series of videos below about the dangers and problems of rail transport of crude oil; and we will continue to post more videos as reports come in. 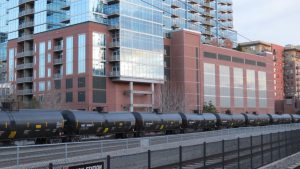 This issue could affect any Colorado community, but particularly downtown Denver where so many trains pass through.

It’s time to move to a fossil free economy!

This article, titled Protecting Your Community From Crude Oil ‘Bomb Trains’, has practical advice on what do to if you find out if there are unit trains of fracked oil traveling through your community. 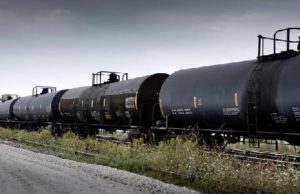 The Crude Gamble of Oil by Rail: Bomb Trains  July 24, 2014, VICE News documentary showing the Canadian accident and others across US

A Danger on Rails April 21, 2015 NY Times documentary that focus on oil trains in Albany NY along the Hudson River