“A living wage should be the right of all Americans.”  Dr. Martin Luther King, Jr.

The only reference to labor in the U.S. Constitution is linked to slavery.  In addition, today “human resources” are treated as an element of Commerce. But workers are people, and not the kind of “people” that include corporations per current judicial doctrine.

The Colorado Community Rights Amendment, run as a ballot initiative in 2014 and 2016, would release the people in local counties and municipalities from corporate control.  If the Community Rights Amendment to the Colorado Constitution is eventually passed by voters, the people would be able to enact local laws that elevate the rights of human beings (natural persons) and nature over corporate “rights” – and those local laws would be enforceable.  Only a state constitutional change can make this happen.  Then local laws can secure workers’ rights like these: 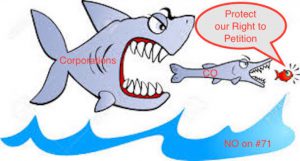